Last week we introduced the concept of 360 reviews, detailing why they’re a fantastic opportunity to get valuable feedback from everyone you work with – not just your line manager.

Whilst they can sound a little scary (perhaps you don’t want to know what the person next to you thinks), an open communication line means there’s the potential to understand where your strengths lie and where you could continue to improve.

They’re not for everyone, and can have negative consequences if not handled carefully (take the Amazon example). But, we believe they’re the only true way to get a completely rounded appraisal.

Not much to ask, right?

Researching the market there were some great tools out there, but nothing really ticked all the boxes. Even our current HR system offers 360 feedback, but only as part of a larger performance appraisal.

We didn’t want our 360s to be that rigid. There had to be fluidity in there.

It left us with one option – to utilise the skills of the team and create our own piece of kit. We already had ideas of what we wanted to include in such a tool, but developing a full review system with questions and scoring would be tough going.

We held an all-team meeting to discuss 360s and discover what the team would want to get from it, rather than it being a chore or taking too long to complete. This provided debate on whether it was best to choose your reviewers or have them choose you, with one of the main question marks being:

“Would people deliberately choose colleagues they know would give them a better score?”

However, the same reasoning was used as we’ve adopted throughout all the company changes this year:

“Trust in people to do the right thing and build your culture for the 98% who will do it right – not the 2% who won’t.”

That left us with a format of:

With a tight timeframe to have a working v1 of the tool ready, the only guidelines for development were:

With that in the hands of development, we were left with the small matter of determining 360 questions to complete the tool.

I’d like to say there’s some method to the madness, but with a goal to continue reiterating the values and driving home their importance, it was clear they needed to play a significant role in our 360 tool – another reason why creating our own system with customisation was the preferable option.

Let’s look at the values again:

Each of these can be attributed to a core skill you would need in the workplace, with some being easy to link up:

This left us with two:

That left us with six core values to be evaluated as part of the first round of 360 reviews.

The next part simply involved research and brainstorming, to put questions against the six core areas that were to be assessed. There were plenty that missed the final cut, with five chosen for each section.

These would be statements that could be assessed by providing a score of 1-5. Then, with work from the development team, an average for each section could be given.

Here are some of the questions from v1 of our 360 tool:

With six core areas for assessment and five statements against each, reviewers would be asked a total of 30 questions – which starts to look comprehensive. Just the type of rounded appraisal we envisioned from the outset.

However, by just providing a score, there wouldn’t be too much actionable feedback. Only an understanding of which core areas you were strongest in.

That’s where the open ended questions come into the picture.

For each skill / value, we wanted to include the following statement:

This would help to summarise each section and provide clarity as to why a certain score was given.

Still, there was more we could do to make this even more actionable and focussed on helping the team to analyse strengths and weaknesses. So, at the end of the survey we opted for these two questions:

It’s easy to write that question differently – what weaknesses should they look to improve / address. However, just a subtle change in approach and it goes from being a positive assessment to one with negative connotations. That’s something we were very keen to avoid.

This approach would be much more likely to encourage positivity.

As promised, here’s a small insight to version one of our 360 review too. There’ll be more included next week as we share some of the tweaks and changes made following feedback from the team. 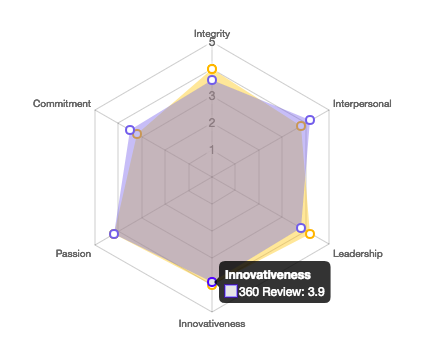 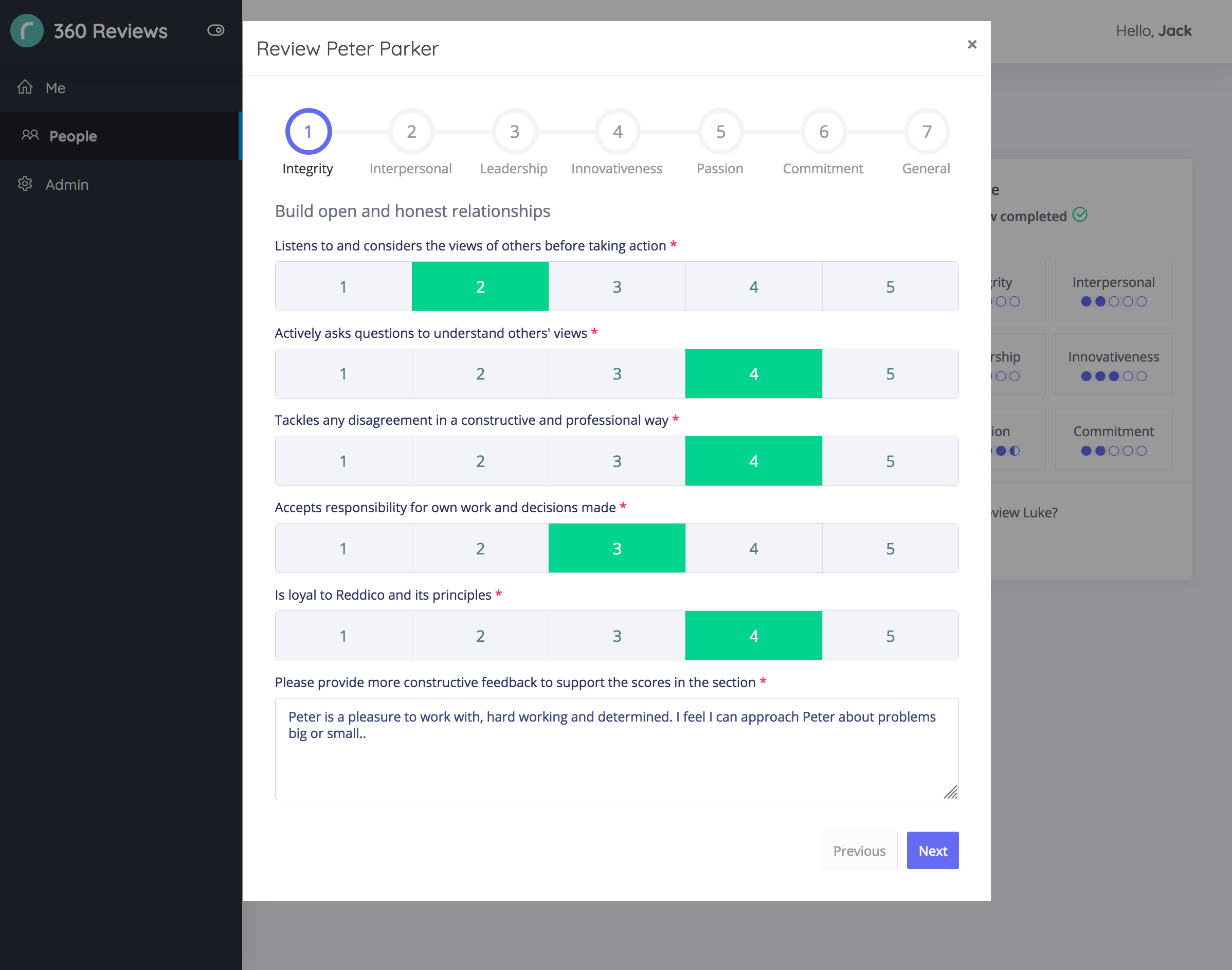 Next week we wrap up our 360 reviews (for now). We’ll be looking at how the first set went, taking feedback from the team on improvements we could make, and rolling out the updated v2.

We’ll also be talking about our plans for 360s in the future, both internally and externally. Do we need to keep a rigid structure of carrying these out quarterly, or could it be more fluid? Can we commercialise the tool and offer something comprehensively better than the alternatives out there?