Reddico was founded in 2012 by Luke Redding, and like all great companies it began life in a spare bedroom. Focusing predominantly on SEO in the early days, we later built out content marketing and technology departments to complement our core service.

Our first ‘official’ office was a windowless room for just two people in Kings Hill (followed by a three person space shortly after). We later co-shared a larger office at the Maidstone Studios.

From 2014/15 Reddico began to grow quickly. With the team doubling in size, it was time to find a place of our own to settle – ending up at the lovely Moat Farm Oast near Tonbridge, Kent (surrounded by an apple orchard).

We now have over 30 members in the team, located all across the UK, Europe, and the wider world. Whilst our Tonbrige office remains a hub, our remote-first approach encourages people to work wherever they wish to.

From our humble beginnings, we’ve earned a range of accolades for our growth, client work, and culture – all of which we’re extremely proud of. They include:

As a business, we’ve always tried to make Reddico a great place to work. However, in the past we were guilty of confusing engagement and happiness with ‘fun’.

We enjoyed company-wide nights out, held regular events, went on annual trips (including Budapest and Barcelona), and had an office complete with beer fridge, table tennis and games console.

These are all great perks and nice-to-haves. But they don’t make a company’s culture – which we were about to realise.

It was at the backend of 2017 that we started to reevaluate our culture, and what it stood for. After running the eNPS survey, we discovered 4 detractors from a team of 12. Not what we were expecting.

This led us down the path of critically analysing the business, and how supportive the framework was for the team. By researching innovative businesses, speaking to a range of companies, and reading books around the principles of putting people first, we began to compile a 6,000-word manifesto.

A new position was created in the business to drive this manifesto forward, and over a 9-month period we watched Reddico slowly change for the better.

Although the Reddico manifesto was the guiding star in our initial approach, we’ve continued to roll out new initiatives, whilst tweaking and amending other areas of the business. It’s resulted in us developing a self-organising way of working that puts complete trust, freedom and responsibility into the team.

Our approach and ways of working are documented throughout this handbook.

Our purpose and values help to shape all the decisions we make across the business, both internally and externally.

To make a real and meaningful impact on the lives of our team, our clients, and the community in which we live.

Our organisational structure has been created as a hybrid of different models and concepts. In many businesses, the typical approach to an organisation is hierarchical. This is often pictured and represented as a pyramid.

The way we work is very different to the standard approach. Collaboration and self-management are key themes, and as such we needed a structure that reflected this.

Departments are referred to as circles, which feed into the core business functions. Representatives from each circle help relay information across the company, ensuring complete transparency. 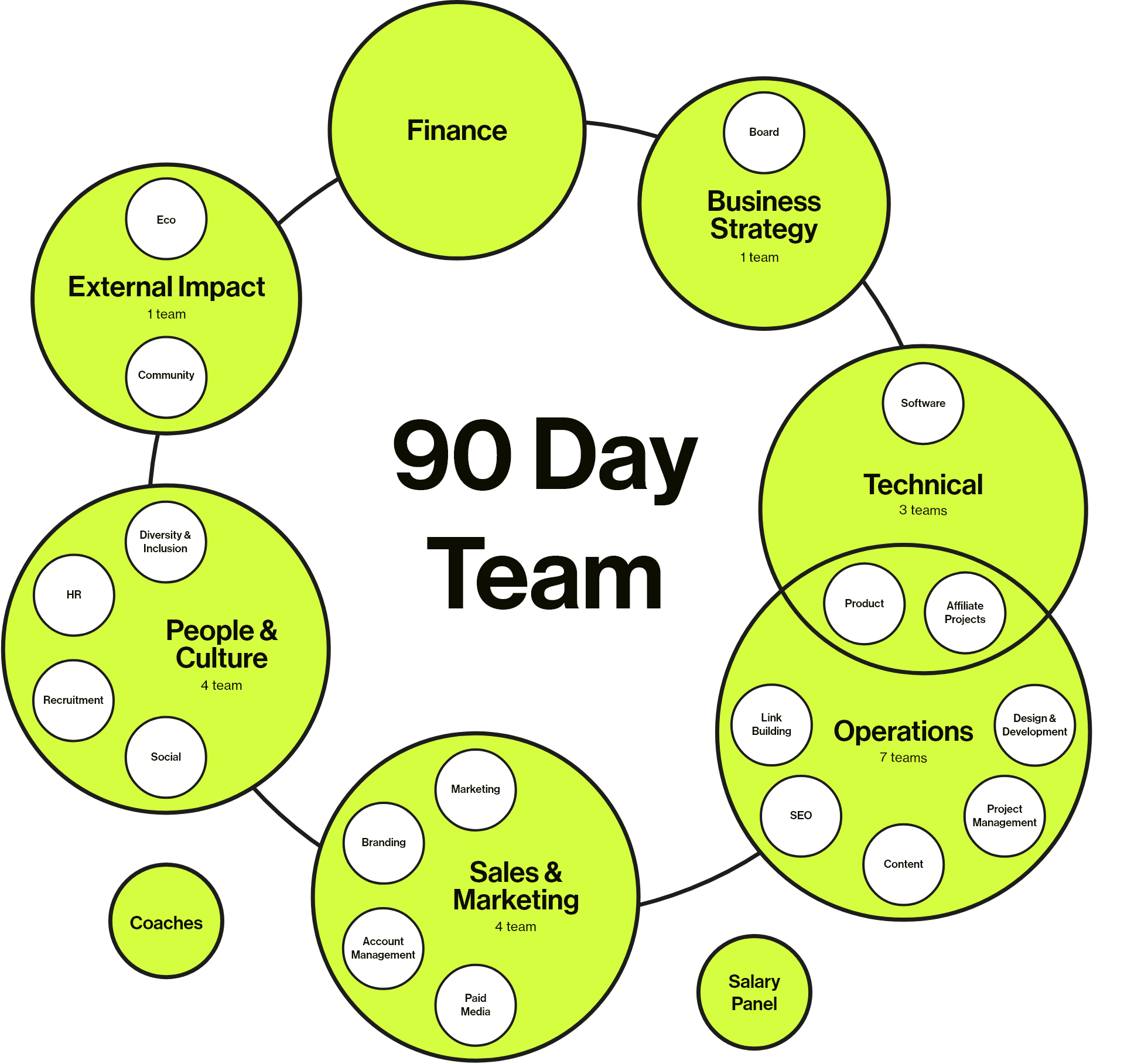